January 4th 2008, The Dresden Dolls at the Phoenix Concert Theatre 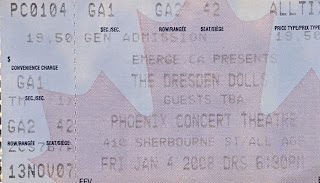 One of the key elements of live music is that it’s a shared experience. When you go to a show you’re going to a space with other people who share your interest in an artist or a style of music, you’re surrounded by people who want to be there for the same reasons that you do. They might have different associations with the songs, they might draw different inspiration from it, but ultimately you're mostly surrounded by like-minded people with a mutual appreciation for the music.

And in the mutual appreciation that comes with the audience experience there can be a strong sense of connection, sometimes even a feeling of community, and for somebody like me that’s always felt isolated and on the outskirts of interaction there’s a huge appeal to that feeling. When you go to a show you’re not listening to a band on your headphones late at night by yourself, rather you’re in a room with other people who have connected with an artist in similar ways to yourself. As an audience member you become part of something more, and it’s really quite an amazing feeling.

A good show that you see with friends becomes something that connects you through shared experience, memories formed together that can make or strengthen the bond between you. A really good show might become the stuff of legend or notoriety within your social circle, taking on a mental shorthand within your minds that says “That was a good time that we had together, wasn’t it?”

On January 4th 2008 Carolyn and I went to see the Dresden Dolls at the Phoenix. It was a cold Friday night in the heart of winter, but we only lived a couple of blocks away and we knew that it could get really warm inside the venue once everybody got in, so we dressed pretty light that night. Which in theory made sense, but didn’t really take into consideration that we’d have to line up before the doors opened.

It was okay though, because when we turned the corner onto Sherbourne there was already a line up that stretched all the way down the street, and as we walked past familiar faces it seemed as though we knew everybody else going to the show that night. It was an evening filled with friends and acquaintances and we were able to keep warm together in little huddles and groups. It was a nice way to start the night, seeing so many people we knew.

In 2008 The Dresden Dolls were still touring for their second album “Yes, Virginia…”, building up a larger audience and greater interest in their work. Amanda Palmer and Brian Viglione had been strong proponents of the early 2000s Dark Cabaret scene, and by 2008 both they and the scene had a fairly decent following around the world, and it seemed like all of our social circle were listening to them at the time. And that’s not surprising, their music was intelligent and engaging, drawing from the kind of dark aesthetic that appealed to a lot of us, along with a literary and cinematic/theatrical inspiration that also interested. From a technical standpoint, they were an incredibly tight band, vocals, piano, and percussion, and they had a punk-y DIY spirit that kept them down to earth. All of these elements came together and made for a strong bond with their audience, and because of that bond The Dresden Dolls kind of transcended the idea of being a band, and become more of a movement that appealed to myself and a lot of the people that I knew. They had built a community around themselves, and their shows drew out like-minded folks and tapped into something that resonated with each of us.

That night the show opened with the band doing a cover of “In the Flesh” by Pink Floyd, an ironic wink to the audience, and then they launched into “Girl Anachronism” which is probably the track that best captures their aesthetic and their musical ideal, clever, manic, fast and furious. Somewhere around the middle of that song I'd say that the boundaries between audience and artist had fallen and we weren't at the Phoenix anymore, we were all just friends at a house party, living in the moment and reveling in the excitement of being able to share that moment together.

It was a short set, maybe only about an hour, but it was kind of glorious, kind of wonderful, kind of magical. They played songs from both albums, a new track that would later be released on Palmer’s first solo album, and a bunch of covers, most notably “Fight For Your Right” by The Beastie Boys with Viglione coming out from behind the kit to play guitar and sing while Palmer filled in on drums.It rocked pretty hard.

It sounds cheezy to say it, but after the show ended and the lights came up there was a glow shining around everybody in the audience, we were all in a state of bliss that comes from the connection that I was talking about earlier, a great live music experience that we had all shared together. It was all pretty awesome, and in the weeks that followed that show would come up from time to time when we’d run into friends, “Did you go to the Dresden Dolls show at the Phoenix? I didn’t see you but I figured you were there, it was awesome…”, and we’d nod and smile. “Yeah, it was pretty awesome,” we’d say, “Fight For Your Right rocked pretty hard…”.

Today marks thirteen years since that night, but I still remember how much I enjoyed it, and I still remember that feeling of community, that after show glow we all had and the bond that was formed with everybody else that was there that night. Bonds like that are strong, tight, and they don’t break very easily.

If you were there, you know what I mean…