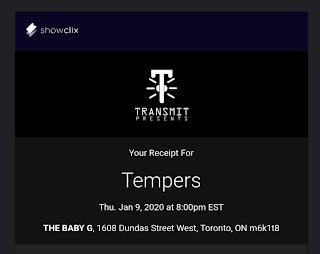 Given how few concerts I saw in 2020 before COVID-19, it feels like I should recognize and celebrate each of them for the precious moments that they were. There weren't very many of them, but all of them are worth remarking on.

On January 9th 2020, I went to see Tempers at the Baby G with my friend Ryan. It was a cold weeknight show, but that's never been a reason to miss out on a gig, and I'm glad that I went as it was a pretty amazing night.

Tempers are a really talented duo from New York who make a melancholy blend of dark Post-Punk and Shoegaze that drifts beautifully, yearning and liminal. I got into them a little later in their career just before they released their second album "Private Life" on Dais Records in 2019, and I immediately fell in love with their sound. Songs like "Leonard Cohen Afterworld", "Daydream" and "Exit" resonated with me and prompted me to check out their earlier album "Services" as well, which I found equally impressive and equally as inspired. When they announced a tour for "Private Life" that would bring them to Toronto it felt like a no-brainer that I would pick up tickets for us to go.

Ryan drove in from out of town and we met at a nearby bar before the show so we could head over together. I go to a lot of shows on my own, it's kind of a thing I've always done, but I also like to see a show with a good friend 'cause it always adds to my enjoyment of the night. Ryan has been a good friend who's been to a lot of shows with me over the years, and he had been the one that turned me on to Tempers with a Spotify link a few months before, so it seemed right that we should see the show together.

We got there early and sat around for a little while catching up on things before the show began. The Baby G is a small room in the west end, and in many ways it reminds me of the Rivoli in terms of layout and shape. You enter the venue through a front room that faces onto the street and then once you're inside there's a bar to your left and the stage takes up about two thirds of the back wall. It's a smallish venue, it only holds a couple of hundred people maybe, so it makes for a nice intimate space to see a band. Good sound, good sightlines, clean washrooms. It's a great space for a show and I look forward to getting back there sometime soon when we're all able to see more shows.

The night started with a set by Gore Gloss, and I didn't know them before that evening but I enjoyed and appreciated their pairing of nuanced electronics and vocals, definitely a band that I'd like to see again when I have the opportunity. As stated in previous posts on this blog I have a respect and an appreciation for anybody who's willing to get up on stage and perform for other people, so I try to make a point of checking out openings act whenever I can. I think it's important to show support and encourage new acts who are starting out, and it's also a great opportunity to see bands early in their career. You never know who's going to break out and be the next big thing, and Gore Gloss, if you're reading this, I'm looking forward to your big break...

Tempers came on shortly after that, and as expected their set was pure Post-Punk Shoegaze bliss, an evening of songs that connected with me and took me to new places and spaces in all the best ways. The duo came out in matching uniforms with white sweatshirts that spelled out "Tempers" when they stood next to each other and shiny black pants that looked like PVC or some other kind of plastic material. I may not be doing justice in my description, but it was a cool look and their outfits gave them a visual symmetry that really added to the idea of them being a cohesive and connected unit on stage.

And they really were connected! They had an almost psychic link between the two of them that seemed exceptionally deep and intense. That shared link contributed to an exceptional performance at the Baby G, a synergy that was completely amazing to see. They responded and reacted to each other in perfect synchronicity, a natural choreography that was utterly fascinating. I totally admire that kind of connection and I was spellbound watching it unfold in front of me on stage.

Their set was amazing, a number of songs from "Private Life", all of them delivered in a haunting and beguiling way that made me forget about the rest of the world, each song drawing me deeper into a secret nocturnal alternate reality that they crafted over the course of the evening. By the end of their set when they closed with "Leonard Cohen Afterworld" I really didn't want to leave the musical space that they had made for us, and it was a bit of a shock to the system when the lights came up and we all headed out into a less blissful physical world.

A couple of weeks afterwards Tempers announced a shared tour with The KVB with a stop in Toronto that was scheduled for May. Having been so impressed with them from the Baby G show, Ryan and I both picked up tickets to see them again and invited our friend Carrie to join us 'cause she would have loved to be part of that blissful drift that they make live. But, well, 2020 happened and... y'know. I'm still holding out hope that the same pairing will happen in the future though. And even if it doesn't, I'm sure that we'll have another chance to see Tempers.

I'm really looking forward to being immersed in their secret nocturnal alternative reality all over again...