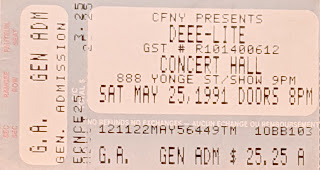 I heart Deee Lite. Their debut album "World Clique" is an essential Pop classic, an excellent collection of sampledelic awesomeness wrapped in rainbows and butterflies, music for clubs and parties and anywhere that feels like a good time. It's a revelation, a larger than life cartoon world filled with bright colours and kaleidescopic swirls, a smorgasbord of carefully curated samples and beats blending Pop, Soul, R'n'B, Dance, Jazz and a million other sounds, all emphasizing the idea of the DJ as a musician in their own right. It was fresh and new and really quite incredible when it came out, and in it's strong embrace of so many different styles and musical eras it succeeded in creating a sound that remains both timeless and relevant even now, thirty years after it's release.

The tour for World Clique had a pair of nights in Toronto at the Concert Hall, and I went to see the Saturday night show with my friend Leah. I had just moved into a new apartment over the Carleton Cinemas, so Leah met me at College subway and we walked north to the show. I remember along the way we got ticketed for jay walking when we crossed the street at Yonge and Isabella, but that distraction didn't really make a difference in our mood though, we were still pretty pumped for the show.

When we got to the Concert Hall we found a good spot about halfway back on the floor in front of the stage, and it was also central enough that we could see most of the audience around us. Everybody was really well dressed, serious club wear and fashions all around, a lot of sunglasses in the half light of the venue, more than a few wigs. It was all pretty cool, and I remember thinking that the black jeans and hoodie I was wearing made me a tad underdressed, but I figured that when the lights went off and everybody started dancing it wouldn't really make a difference.

The show began with Deee Lite Theme, the band vamping on the track and building up anticipation until Lady Miss Kier and her dancers strut out onto the stage, catsuited, be-wigged, and Fluevog shoe'd, proud and fierce like the Superstar that she is. From there on the rest of the show was a blur of funkified electric dancing and non-stop groovilicious beatz. In an effort to keep things interesting Deee Lite were playing with a live band for this tour and it was their job to play all the samples from the album in a live format, which made for some pretty incredible sounds. Bootsy Collins played bass for them, deep and groovy, stars and top hats, everything you could ever want from a classic bass Superhero.

Over the next hour or so Deee Lite treated the audience to a choreographed and tight set that had the whole room shaking and grooving, with an instrumental break for a costume change here, a shout out to New York City there, feather boas, high kicks, and dancing, a whole lot of dancing both on stage by the band and on the floor by the audience. Given that they only had one album at the time they played it all pretty much in it's entirety, with Groove is in the Heart in the middle of the set, elongated and given a funky breakdown towards the end. At one point near the end of the show Kier pulled out a Polaroid camera and started taking pictures of the audience, and I remember thinking that was because she wanted to remember the night just as much as we did. In that pre-social media era that was the 90s, a gesture like that seemed really sincere and genuine, and as I write this I hope that she still has those Polaroids and I hope that they still make her smile when she looks at them.

Deee Lite at the Concert Hall was an incredible show, a moment in time that I'll never forget. It was the only time I saw them live, but in some ways that may be for the best as it would be hard to live up to the awesomeness of that show in 1991. I kind of wish that I had some Polaroids from that night though, they'd be a nice memento to go along with all of my memories of the show...