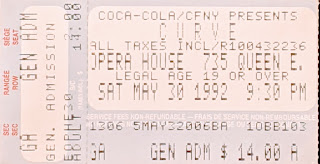 Of all the bands that came out of the nineties, Curve are probably the one that made the biggest impact on me. From the release of the "Blindfold" EP in 1991 they existed fully formed and perfect in every way, a stylish blend of processed sound and electronics that fully complimented haunting and otherworldly vocals. Over the next few years Toni Halliday and Dean Garcia went on to produce a series of amazing albums and EPs that include some of the best songs of that era, forging a unique and distinct sound who's impact and influence is still felt today. Their debut album "Doppleganger" from 1992 stands out as one of their best, and remains a claustrophobic and unsettling masterpiece that simultaneously haunts and seduces the listener, drawing them deep under it's spell and leaving them changed upon it's completion. I'm pretty sure that there's never been another album quite like it, and I have my doubts that there ever will be.

Curve did a North American tour to support the release of the album that included a stop at the Opera House in May 1992, and I was lucky enough to be there. I had a spot on the floor relatively close to the stage when Curve's set began, but there was a wall of dry ice and fog that prevented me from really seeing any of the band. The fog continued to obscure my view for most of the night so all I really saw were lights that would occasionally flash and some movements or shadows when band members came closer to the edge of the stage. But even though I couldn't really see anything it was still an amazing experience, a complete immersion in the music. Halliday's voice rang out through the Opera House offering a focus for the senses that pushed and pulled like waves, alternately soothing, frightening, inviting, and warning the audience. Garcia and the band were especially tight that evening, building an incredible wall of sound, a slick blend of processed feedback and joyful noise, stretching tones and pulses in ways that expanded beyond the studio work that I was already familiar with and adding new and unique elements and colours to the music.

The set was about an hour long and focused mostly on material from "Doppelganger" along with some tracks from the earlier EPs as well. Die Like a Dog was intense and driving, Halliday's smooth vocals contrasting with jagged feedback and wah wah distortion. Their performance of the title track from the album arrived around the middle of the set, the chorus of "You must hate me for being born, you must hate me for being me..." chilling me straight to the bone, a deliciously anxious and unsettling moment. Zoo was towards the end of the set, lyrics about psychotic dreams, dressing in black, and being frightened by sunlight rising and falling in intensity while a funky beat propelled everything forward, keeping us all from harm. Fait Accompli closed the night, rolling bass and a frenzied whirl of sound, Halliday's voice at the centre of it all.

That night at the Opera House Curve crafted a complete and total sensory experience that stands as one of the best concerts I've ever been to, a balanced synergy of artistry, creation of space, tension, and engagement. I was lucky enough to see Curve perform a few more times after that, and they always impressed and inspired me with what they were doing, but it was this first show I saw that's really stayed with me all these years, a fully formed and perfect moment from a fully formed and perfect band...