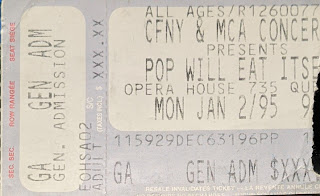 Recent events have inspired me to return to one of my earlier blogs and start writing about concerts again. In a year where there haven't been many opportunities to see live music I've found myself exceedingly nostalgic for those days when there were, and I've taken some comfort in thinking about the great music that I've been lucky enough to see, the shows that I was at, and the moments that I was part of.

So with that in mind, I thought I'd re-launch A Pile of Concert Tickets, to look back at some of the shows I've gone to over the years and to reflect on what they mean to me. I don't have any illusions that I'm going to make any great observations or grand statements about the nature of life in these posts, but I look forward to taking a trip down memory lane and to connect with some moments that I haven't thought about in a while. Maybe in reading these posts you'll find some connection as well, and who knows, maybe that'll trigger your own recollections, your own reflections. I hope that it does, and I hope that you benefit from that experience...

On January 2nd, 1995, I went to see Pop Will Eat Itself at the Phoenix Concert Theatre with my buddy Robin. It was a cold winter's day, the sky had already taken on that frigid gray look that it has in the long stretch between the holidays and spring, and I seem to remember that everybody, myself included, was all still kind of hungover and exhausted from the revelries of the last few days. It wasn't really the ideal time to see a show, but we were there and I guess we were all hoping to make the best of it.

You'll notice from the ticket stub above that it says the show happened at the Opera House, but it was actually moved to the Phoenix Concert Theatre at the last minute. I'm a fan of the Phoenix, it's a good place to see a show, a long room east of Yonge Street that holds a good sized audience, maybe about 1500? Something like that. It's a good space, good sightlines and high ceilings, and generally pretty good sound. I've seen dozens of shows there, countless bands, it's one of those venues that feels like home to me, and I've always been of the belief that a good venue, a place where you feel at home, that's the start of a good show.

In 1995 Pop Will Eat Itself were pretty much at the peak of their career, having moved away from their Grebo roots and embracing a more Industrial sound after signing with Nothing, and their current single at the time "Ich Bin Ein Auslander" was doing well at clubs. I'd already seen them a couple of times by that point, but 1995 was a particularly good period to see them, that sweet spot in the band's career where they were experienced enough to put on a good show, and their back catalog of songs was strong enough to make for a solid set of music.

They opened the show with "Auslander" and right from the start the band were in full manic energy mode, literally jumping throughout it's entire length. Clint Mansell was still with the band then, and he was wearing wrap around sunglasses and a turtleneck with short bleached blonde hair, which combined with all the jumping made him look a lot like Frank Gorshin's Riddler. This was not a bad thing. In later years Mansell would become one of the best soundtrack artists in the business, crafting unforgettable music for "Requiem for a Dream", "Moon", and countless other films, and I admire his work greatly, but in my mind's eye whenever I hear his name associated with a soundtrack I can't help but think of The Riddler.

PWEI were always about energy, always about being on, and the show that night was no different, they gave it their all, and pretty soon they had the entire room giving back that same energy, holiday hangovers forgotten amid that feeling of connection and synergy between artist and audience that comes with a good show. That feeling can take a number of different shapes, sometimes it happens on a cerebral or emotional level, but that night it was entirely physical and had the audience all stomping and dancing and singing along with the band.

Over the next hour and a half they played club hits, singles, new songs from their latest album, and everybody in the room was totally into it. "Wise Up Sucker" rocked hard with a million pop culture references, and they played "Def Con One" as an encore, resplendent in beats and scratches and Siouxsie and Stooges samples, and even though I've been vegetarian for most of my life I was more than happy to get Big Mac Fries to go at the time.

It was a pretty amazing night, and I can't help but smile thinking of what an incredible experience it is to be able to share that experience with a group of strangers, that carefree abandon that comes from the shared enjoyment of live music. PWEI in 1995 wasn't the best show I ever saw, to be honest it was just one of dozens of shows I saw that year, one of hundreds or thousands of shows I've seen in my life, and I haven't really thought about it very much in the years since then, but as I reflect on it now in a time where live music seems so far away from all of us I'm struck not only by my memories of this particular show, but also by what an amazing experience concerts are and the magical way that an artist can connect so easily with an audience to build an energy and an excitement together, an incredible shared moment that can last through the night and in some cases through the years.

I can hardly wait for it...