January 30th 2020, Föllakzoid at the Garrison 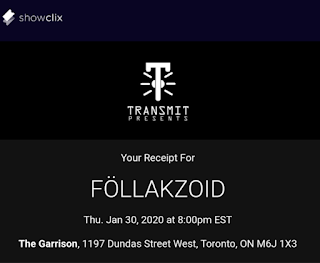 There are a lot of things that can make a great show. There's talent and technical ability, which paired with passion and enthusiasm can lead to amazing and impressive moments. There's also a level of connection between the artist and the audience, whether it's through a set list that covers all the classics or the ability to engage and interact with each other at an emotionally intimate level. Sometimes it's just the circumstances that surround the show, that night out with friends that becomes a storied part of your shared history. And sometimes it's when the band is able to take you to a whole new space like Föllakzoid did at the Garrison on January 30th 2020.

I'll admit that I don't know much about Föllakzoid. They're a trio from Chile featuring guitar, drums, and synths. Since 2009 they've put out a handful of releases, all of them really great, really amazing albums, each of them an epic aural journey. Individually they're all very solid musicians and together they're an exceptionally tight musical unit. Annnnnnnnd that's about all I can say about them...

But I can say more about their music and in particular the music they made at the Garrison. Whether it's on record or in person, Föllakzoid make an expansive sound that fills both your head and the room you're in, whether it's your bedroom or a big venue. It drifts languidly through the soundscape with a living rhythm all of it's own, looping in and around itself until it becomes beguiling, hypnotizing, mesmerizing. But don't mistake the idea of repetition as just a simple format, because careful listening reveals random elements and textures, along with a more numerical than temporal structure. And those elements and textures and numerical structures all come together in such a way as to create a whole new focus for the senses, a new space for listeners or an audience to exist in.

And that's exactly what happened when they played that night. Shroud in blue light and fog throughout the whole performance, the band made an enormous sound that filled up the entirety of the Garrison, wrapping around all of the audience and taking us somewhere faraway from the physical confines of the room, someplace new where we were all happy to exist and explore a new sensory space with them.

It was a pretty incredible experience.

"So what does all this sound like?" I can hear some of you asking and that's a really good question but it's not an easy one to answer. Their music immediately brings to mind Space Music, along with elements of Ambient, and Trance, and maybe even a little bit of Prog. There's no denying that Föllakzoid's work runs parallel to all of those genres in some ways, but it's really that sense of immersion and movement within a sonic space that truly defines what they do, and that's a hard thing to describe without having actually been there. The nearest I can explain it is to ask you to think back to any of those teenage sensory deprivation experiments you may have tried in high school where you'd close your eyes and lay in bed listening to your favorite albums with headphones on and the lights off, really intently listening, paying close attention to the ebb and flow of the music, the ways that it rose and fell, the highs and lows, all of that. It may not have happened every time, but I'm sure you'll remember a few times where you were swept away from where you were, transported somewhere else by the music, even if it was only for a few minutes.

That's a beautiful and incredible feeling, an intense and amazing experience, isn't it? That's what a Föllakzoid show is like, and that's what it was like that night at the Garrison, a great show where the band was able to sweeep us all away and take us to a whole new space.

I can't wait to experience that feeling again...