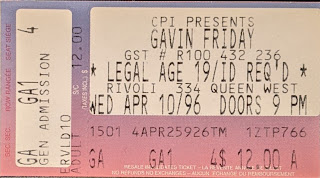 Gavin Friday may not be a household name, but he's had a solid career beginning with his early days as lead singer in The Virgin Prunes through to his work as a solo artist. Possessed of an impressive vocal range that shifts easily from commanding depths to outstanding highs, he's an excellent story teller in his songs, a spellbinding and mesmerizing presence who is beguiling, hypnotic. His 1995 album "Shag Tobacco" is an excellent example of his sound, a classic release that plays fast and loose with the Pop aesthetic and kind of transcends the genre in hindsight, becoming it's own distinct style and sound. There are elements of Dark Cabaret, Glam, Opera, and Punk, all mixed together in a richly textured blend that works really well and sounds quite unique.

In the spring of '96, Friday went on tour to support the album and I went to see him with my friend Bevin, one of dozens of shows we've seen together. Bevin and I both share similar tastes, and over the years we've seen a lot of live music, sharing in the joy and rapture that comes from a great show. She feels much the same way as I do about concerts, about performance, and her enthusiasm and excitement make her an excellent companion to see a gig with.

Friday was playing at The Rivoli, a small club on Queen Street just a few doors east of Spadina, and it's always been a great place to see a show. It's a small venue, I can't imagine that it holds any more than maybe two or three hundred people, and you enter by walking through the restaurant in the front and the venue is a tiny brick walled space in the back. There's a short bar that runs along the back wall opposite the stage, along the East wall there are a few stools, and the West wall has a few cushioned seats, but it's the kind of place that gets crowded enough that you can't really sit down if you want to see the stage very well.

I love the Rivoli, and I've seen tons of shows there over the years, a lot of local bands, a lot of touring shows, I've even played there myself a few times. I saw Mourning Sickness there once, they were an incredible artistic and musical collective that have a legendary status in the Toronto scene, and I've seen dozens of friends' bands play there over the years. I saw Hole play a show in support of their first album, and a solo gig by Amanda Palmer from the Dresden Dolls. The first time I saw Thrive play was at the Rivoli, part of a 'zine launch for The Ninth Wave and I made a number of lifelong friends that evening. In the early nineties The Riv used to host industrial video nights during the week, and I remember those nights being the first opportunity I had to see videos by Einstürzende Neubauten, Nick Cave, and others. The Rivoli has always been a special place in my mind, and it will always hold a special place in my heart.

Friday wore a simple black suit with a white shirt that night, and looked rather dashing I thought, and over the course of the evening he and his band played almost the entirety of  "Shag Tobacco" along with a couple of covers. It was a strong performance, an excellent blend of charisma and talent that worked really effectively and entertained greatly. He sang through a megaphone on Caruso, a track that stands out on the album as kind of a conceptual centrepiece around which everything else is built. The live version was delivered really well, with Friday's vocals building a manic intensity as the song progressed. It was pretty awesome.

There was a great performance of Angel, a spotlight shining on a disco ball overhead that brightened the room with a million sparkles. Friday came down from the small stage and started to walk through the audience, singing directly to people only inches away from them, moving from one person to the next. It was a high point of the night, an example of tearing down the walls that separate artist and audience and bringing them closer together, an amazing and sensual moment that's stayed with me for years. I may have swooned at the time. I still get a little flustered writing about it now...

There were other songs, My Twentieth Century, You and Me and World War Three, more, each of them capturing the spirit of the album and building on Friday's charm. It was a good night, an excellent evening of music and performance by a charismatic performer and a great band, the kind of show that leaves you with a smile on your face. When Friday came back to Toronto later that year for a show at Lee's Palace Bevin and I made sure to go to that show too. He played largely the same set along with a cover of The Jean Genie which was pretty amazing, a big song for a big personality.

As far as I know that second show was the last time that Gavin Friday ever played in Toronto, and in hindsight I'm glad that Bevin and I were able to see him at the Rivoli and again later at Lee's. Friday is a dynamic and impressive artist, and even now twenty five years later I still look back on those evenings fondly, a testimony not only to Friday's performance, but also to the wonder of live music and the memories and feelings that it can inspire...