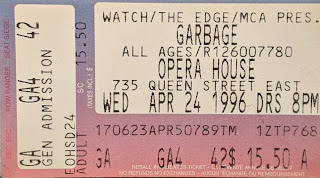 Garbage are pretty excellent. With the release of their first album in 1995 they emerged fully formed and pretty much perfect from the start with a fresh sound, an impressive energy, and crazy tight musicianship. Tracks like Queer, Only Happy When it Rains, and Stupid Girl were all great singles that received tons of play in any number of spaces, and their videos were in high rotation on most of the music outlets available at the time. It was clear from the beginning that lead singer Shirley Manson was born to be a Rock Star, presenting a confidence and talent that was totally inspiring, a charisma that few before or after have ever been able to match. There's no question that Garbage were one of the best bands to come out of the nineties and they remain awesome to this day.

Garbage toured a fair bit for their debut album, and though it wasn't their first trip to Toronto their stop at the Opera House on April 24th 1996 was the first time that I was able to get tickets to see them, so I was pretty excited leading up to the show. My friend Helen was also a fan and we thought it would be a good idea to see them together, because a show is always better when you see it with your fan friends. That's science, right? It's an indisputable fact...

We met up at Futures on Queen just a little bit west of Bathurst around 730pm and decided to have a coffee before heading out to the Opera House, thinking that we'd just take the Queen Streetcar out to the East end. Doors were set to open at 8pm and we figured that we'd have loads of time before the show started, so we sat at Futures and caught up. We hadn't seen each other in a while so it was a nice chance to get together and shoot the breeze, talking about Garbage and songs that we both liked on the album and how much we were looking forward to seeing them live. We agreed that Vow was their best song and that was the one that we both wanted to see live the most.

Around 9pm we decided we should get going, figuring that the band would be on around 10 or 1015pm, and it usually takes around half an hour for the streetcar to get from Bathurst to Broadview. We waited outside of Futures for the Queen car to come along, and we kept talking, a little bit more catch up, some gossip. Nothing too deep or engaging, mostly just light conversation, stuff that made us both laugh, the comfortable kinds of things that friends talk about while they're passing the time. I can't remember much of it very specifically, but I remember that it was good talk, and I was happy to be sharing that time with Helen.

When we got to the show the band were already on stage playing Only Happy When it Rains and they were pretty into it. Shirley Manson was at centre stage and she was radiating confidence and charisma, a dynamic and riveting presence that commanded the entire room. The rest of the band were tight and slick in their playing, but it was clear to every one in the audience that Manson was the star of the show. The crowd was really into it, the song was a hit and everybody was really happy to be hearing it live, it was one of those magical concert moments where the band and the audience were in perfect balance with each other, an electric feedback loop that everybody was feeding off of.

After that the opening notes of Vow began and Manson started the first line, "I can't use what I can't abuse...", not so much singing as intoning, conjuring, then it all erupted into an amazing version of the song that was fiery and angry and Punk-y and Pop-y and all sorts of awesome. The sound rose and swelled and then came back around and it was incredible, totally incredible. The band had already reached a peak, and as the outro was playing I remember turning to Helen and asking how they could maintain that kind of energy for the rest of the show?

And almost as soon as I finished my question, the band waved to the audience and said, "Thank you! Good night!" and walked off the stage. Evidently we had gotten there late and what we had thought was the start of the night was actually the end of it. Garbage came back out and did a short encore which softened the blow for us a little bit but it was still kind of a drag, and as we were leaving Helen and I were kicking ourselves for not getting there earlier.

In the years following I've seen Garbage a few more times, and they've always put on a great show, always delivered a great performance, but I learned my lesson that night and since then I've always made sure to check with the venue to find out when the band is going on so I'm not late. I'm actually pretty OCD about that to be honest, but y'know, I'd rather not miss anything if I can help it.

But even though we missed most of the show, I still look back on the evening fondly because it was good time spent with a good friend. We may not have seen much of Garbage's set, but Helen and I got to talk and connect and hang together. That kind of thing is it's own reward, and that's something I'm especially aware of now when I've seen so few of my friends in person over the last year.

In the end I had a good night out with a friend and we got to see an excellent band play a handful of great songs including the one that we both wanted to see the most.

That sounds like a pretty great time to me, and that's why I always remember Garbage at the Opera House as a great show and a great night out...