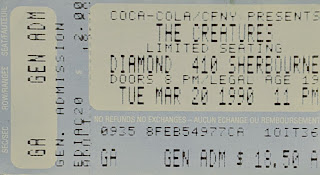 You never know what you'll take away from the concert experience. Every night is unique and special in its own way, and over the years I've amassed a collection of memories and moments from each of the shows I've been to that continue to resonate with me. Some of those memories have become stories that I've told many times over, and some of them I don't know if I've ever shared with anybody else, but they're in no way less precious to me. The Creatures at the Diamond is one of those shows that never really seems to come up in conversation when I talk about shows with my friends, but it was a really great gig and a good reminder for me that you never know what will make the biggest impact when you go to a show.

For many years now, Siouxsie and the Banshees have been one of my favorite bands, a kaleidoscopic dark carnival of Punk energy, immensely talented and immensely powerful, artistic, relevant, resonant. They stand as an ideal in my mind, a near-perfect balance of skill and passion, and I have a tremendous appreciation for their work. Following the release of their album "Peepshow" and the ensuing tour in 1988, the band took a hiatus for a little while to pursue other interests, and during that time lead singer Siouxsie Sioux and drummer Budgie took the opportunity to return to their side project as The Creatures. Based almost exclusively around vocals and percussion, The Creatures embraced a musical experimentalism that captured the Banshees' ideology and aesthetic, but still remained uniquely their own in terms of sound and approach.

The resulting album "Boomerang" builds on the vocal and drum foundation of earlier work and adds horns and other woodwinds to fill everything out. It has a distinct sound to it, something identifiable that you can connect with but it remains simultaneously alien and abstract. It's still recognizably Siouxsie singing, but the setting, the sound, it's something distinct and different from what other albums with the Banshees would suggest, and that distinction adds greatly to its appeal.

Following the release of "Boomerang", the pair announced a tour with a stop in Toronto at The Diamond, which was a club in the same space where the Phoenix stands now. The size of the room was the same, but the stage was set at centre of the space along the South wall, rather than the West end of the room where it is now. That placement gave The Diamond a greater feeling of closeness to the stage wherever you were in the space, and that sense of closeness was one of the reasons that The Diamond had become a particularly popular venue in the Toronto music scene at the time.

I got a pair of tickets for Mara and I to see the show when it was announced, I wasn't about to miss the chance to see The Creatures, though admittedly Mara wasn't quite as interested as I was. Mara's tastes ran more towards classic rock, and a drum and vocal set by a pair of Punk icons who were steadfast in their resolve not to play any of the songs they were well known for was a bit of a hard sell. But to her credit, Mara was willing to try it out because it was something that I was interested and excited about. Mara was cool that way, and I will always be grateful to her for that kind of support. I hope that in the time that we were together I was able to show her the same kind of support in terms of her own interests.

Before the show, we met up with my friend Heather at Kelsey's on Bloor so we could all go to the show together. She had moved into residence just south of Bloor a few months earlier, and the show was a good opportunity for us to catch up. Heather and I were both big fans of the Banshees, and in hindsight I can appreciate that Mara may not have been as interested to hear us ramble on about various B-sides and favorite album tracks, but despite that Mara did seem to enjoy seeing our enthusiasm and excitement leading up to the show. While we were all talking, Mara and I split a hot brownie sundae, because of course there's nothing like loading up on sugar when you're excited about a show, right? And while a hot brownie sundae may not have been the healthiest choice for dinner, it was definitely a tasty choice as anybody who remembers Kelsey's on Bloor can attest to.

We walked from Kelsey's to the Diamond and got there just before the show was supposed to start so there wasn't very long for us to wait. Within a few minutes of our arrival The Creatures hit the stage, with Siouxsie wearing a black and white striped cat suit and black leather vest, and Budgie all flailing limbs and a huge mop of blond hair. Over the next hour and a half the Diamond played host to a great set of music by two immensely talented artists who were challenging themselves and their audience with new sounds and ideas, and it was all pretty amazing. Siouxsie has always been an incredibly dynamic and charismatic performer, a captivating singer who keeps the audience spellbound throughout her performance. That night she was in particularly fine form and her voice was especially strong and powerful, hitting notes and carrying the show like the consummate artist that she is. Budgie was a force of nature, keeping the beat and shaping sounds on his drum kit, triggering MIDI signals and samples that added to everything that he was doing percussively.

They played Standing There early in the set, as the lead single from the "Boomerang" album it had been getting a lot of rotation on radio and MuchMusic at the time, and playing it near the start of the show was a good hook to draw the audience deeper into what the band were doing. From that point on the pair were on fire, bringing the "Boomerang" album and earlier music from the Creatures' catalog to life with a passion, a vision, and a ferocity that truly impressed. The frantic beats of But Not Them, the misleadingly playful sounds of Fury Eyes, it was all pretty incredible. I remember a few people shouting out for Banshees songs, and while I would have totally enjoyed hearing something, I'm glad that they stuck to their guns and only played their own material that night. It would have been easy for them to pull out any one of a dozen singles, but by restricting themselves to the more obscure Creatures material they forced the audience to immerse themselves in a different sound and judge the performance on it's own merits. I admire that and I respect it as an artistic decision. It takes courage to walk away from a beloved catalog of songs that fans are vying for, and still deliver an amazing show.

The highlight of the night for me was towards the end of the show, a huge and haunted take on Pluto Drive, an invitation to the audience to leave Earth for distant and colder shores. Blue lighting flashed and pulsed in time with the beat, Budgie building a wall of percussive sound, Siouxsie at the centre of the stage with her arms outstretched to either side, her voice rising and falling in waves as the song progressed. It was a pretty amazing moment and I'm grateful to have been there to see it. Definitely a high point out of all the times I've seen her perform.

After the set was done Heather met up with some other friends and said good night to us, so Mara and I took the subway back to her place, and pretty much all the way home I was a raving fan boy about the show, going on about this drum fill or that song or just the way that the show made me feel. Admittedly,  I was probably pretty over the top in terms of my excitement, but Mara still seemed to enjoy my enthusiasm and listened while I rambled on about the Creatures. And when I asked her about what her favorite part of the night was, thinking she'd mention a favorite song or a particularly cool moment, she smiled even wider and told me that she liked sharing the hot brownie sundae with me at Kelsey's before the concert.

I guess different parts of an evening mean different things to different people, and maybe that show didn't mean as much to Mara as it did to me, but I'm glad that she enjoyed dinner. I would hope that she liked the show too, but if a hot brownie sundae was her favorite part of the night then that's totally okay. Mara got to enjoy a really great hot brownie sundae and I was excited enough about the show for both of us that night...