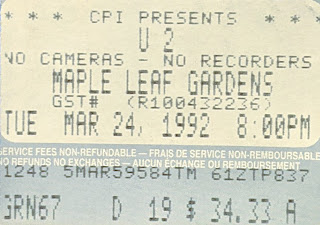 There's no question that "Achtung Baby" was a high point in U2's career. It was one of those albums where the band's songwriting, creativity, and popularity all came together in perfect unison, a moment in time where everything just seemed to click. Songs like Mysterious Ways, One, Even Better Than The Real Thing, they were all great singles, great moments that captured and help define a particular nineties sound, and while U2 may have existed outside of the dominant styles and trends of the time, they were still very much a part of what was happening musically.

But as great as the album was, U2's reputation has always been built around their live shows and it was the tour that followed the release of "Achtung Baby" that really cemented their reputation as one of the biggest bands in the world. U2 had already broken through to the Stadium market a few years before with the "The Joshua Tree" and they were well aware of how to make their sound work in a big space, how to create a moment of intimacy with an audience in a venue that wasn't normally conducive to that kind of feeling. But they had visions of using their live show in different ways for the new album, making it into more of a spectacle, more of an event, and those visions were where Zoo TV came in.

Zoo TV was meant to be over the top, a concert experience turned up to eleven where the visuals would be just as important and just as significant as the music itself. And to their credit, U2 did a pretty great job of bringing that all together, crafting a legendary tour that played around the world for a couple of years to hundreds of thousands of people. Zoo TV is kind of a landmark in modern concert history, and deservedly so, as it was a perfect juxtaposition of the band's talent and vision, perfectly aligned with the zeitgeist of early nineties culture.

But before becoming the huge stadium tour that it's remembered as, Zoo TV started with a series of smaller shows in arena sized venues, a lot smaller than the spaces that U2 had been playing for the last few years prior. Their last visit to Toronto had been in 1987 where they played to about 64,000 people at CNE Stadium, so playing at Maple Leaf Gardens with less than a quarter of the number of seats made this show a pretty hot ticket. That scarcity of seats, plus the ubiquitous nature of the album at the time made it one of the most anticipated gigs of the year, setting a high bar for the band to live up to. It should come as no surprise that they not only lived up to it but far surpassed all expectations.

My friend Leah and I went to the show sitting up high in the Green section, not quite at the back of the venue but pretty darn close. We were both fine with that though, reasoning that a little height and  distance would add to our appreciation of the spectacle that the band promised. I mean, if they were going to present an incredible aural and visual experience then we didn't want to miss out on any of it, and we figured that we had pretty much the perfect seats to appreciate everything.

Pixies opened the show and they were awesome. I had already seen them play a couple of times before, and they were always an amazing live act, big and loud and screaming and just excellent all around. Pixies were pretty much at the height of their powers in 1992 having just released "Trompe Le Monde", and they drew heavily from that album, along with a couple of songs from "Doolittle" and a few more, making for a great set that really captured the essence and tremendous strengths of the band (though admittedly they didn't play Monkey Gone to Heaven which has always been my favorite of theirs...). A few months after this show they broke up, and this would be their last Toronto appearance until they reformed in the mid-2000s so I'm glad that we got to see them one more time before then.

There was a short break after Pixies' set, and then the lights went down and a number of giant video screens around the stage turned on to a display of static, a granular grey emptiness, and then U2 were on stage and started playing Zoo Station which also opened the album. And after a moment, Bono appeared and started to slide across the front of the screens, a black leather shadow in contrast to the video, an aberration, a fly in the ointment, a glitch in the matrix. It was a simple effect, but it was stunning, and as the song progressed and he moved from end to end of the stage it was really quite an amazing visual, a prolonged entrance that really built up the moment.

Following that, the lights went up a bit more, and the static was replaced with a bunch of slogans and phrases that flashed rapidly across the video screens while the band played the first single from the album, The Fly. I've always enjoyed that track, and that night it was presented in a dynamic and urgent way that really added to the song's strengths, a kind of future-shock anthem that ushered in a new era for the band's sound. I know that it's pretty well agreed upon that "Achtung Baby" marked a stylistic shift for U2, but even more so I think that one song was the start of that change, moving them from one sphere to another.

Over the next few songs they played a set of tracks taken from the new album, all received with rapturous applause and excitement. "Achtung Baby" had only been released a few weeks prior to the show and the audience hadn't quite had the opportunity to familiarize themselves with it yet, but U2 was still able to keep everybody excited, engaged, and totally into it. Tracks like Mysterious Ways and One may not have been nearly as well known as they would become, but that night they seemed just as vital, just as powerful as they are now having reached a classic status among the band's hits.

About halfway through the show and after having played almost all of the "Achtung Baby" album, the band left the main stage to play a couple of older songs from a smaller stage in the middle of the arena, getting closer to the audience and playing an intimate mini-set surrounded by fans. And while that kind of thing had been done before, and has been done since many times by many artists, as a gesture it had a certain significance, a moment where the band stripped all the pretense of their production and reached out to the audience in a direct and literal way. I have no idea if that was the actual intention or not, maybe they just thought it would look cool to step out from behind all the videos and lights and stuff, but as a member of the audience it was the crest of a wave for that show, another moment like the opening where something simple took on great significance and importance.

The rest of the set played out with a few songs from "The Joshua Tree" and "The Unforgettable Fire", nothing earlier than that so no Sunday Bloody Sunday, New Years Day, or I Will Follow, but despite the absence of those songs it remained a thoroughly amazing show, and a testimony to the power of the band's new material. They closed the set proper with I Still Haven't Found What I'm Looking For, and after a couple of minutes they came back to play Desire and With or Without You, two solid choices for an encore and an excellent end to the evening.

Over the months to follow U2 would expand and build upon the ideas behind this tour, eventually returning to the stadiums that they had been playing previously and making Zoo TV into even more of a visual extravaganza. They came back for a pair of shows in the summer at CNE Stadium, and while they were still really impressive concerts, I feel like I enjoyed the performance at the Gardens more as there was still a feeling of freshness and spontaneity to it, a feeling that they were doing something new and different, something exciting.