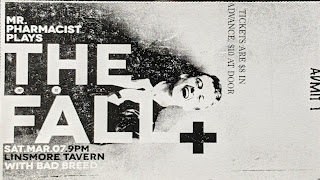 The last show I saw before lockdown was Bad Breed at the Linsmore Tavern on March 7th 2020. It was a Saturday night in the east end, a little chilly but not so cold that it was uncomfortable, and I wanted to head out to see my friend Mike's band play and show my support for what they do. I've known Mike for years, we were introduced by our mutual friend Brooke in the summer of 1990, and we worked together for a while in the early two thousands. Mike is one of those people I've known for a long, long, long time and I'm always happy to see him.

Over the years I've seen Mike play in tons of bands, sometimes as a drummer, sometimes as the front person, sometimes sharing the spotlight with others. He's a charismatic performer, easily taking command of the audience when he's on stage, a strong and engaging presence that always impresses. I've enjoyed all of the bands that he's been in, but the latest act he's been playing with, Bad Breed, is one that I'm really impressed with, an incredible group of artists who've come together to make a unique and soulful sound that blends styles and genres effortlessly into something rich and exciting all of their own. They're pretty dynamic, pretty amazing, and they're well worth checking out on Bandcamp or Spotify if you're looking for something new.

I went to the show by myself that night and when I got there I found a stool by the front door that had a slightly raised view of the stage. I sat there reading my Kobo for a bit before the show started, and when he saw me Mike came by to say hi for a couple of minutes, asking me how I was doing, what I was reading ("The Stand" by Stephen King if you're interested), that kind of easy and casual conversation that comes with people who have known each other for so long. But as comfortable as it was to chat with Mike, there was a tension all around the room in pretty much everybody else. It was a pretty crowded space so I was able to hear a lot of people talking, and there was literally only one topic on everybody's lips, COVID-19 and what was happening around the world. Everybody had a story to tell or something to say, "I hear that cases are climbing in Montreal...", "I just got back from New Orleans, no cases there but at the airport they were asking me a ton of questions...", "What do you think is going to happen?", "We went to Costco and there was hardly any toilet paper..."

Despite that tension in the air we were all there for a show and when the band started their set nobody was interested in talking about pandemics any more. Bad Breed are an exceptionally tight unit, a solid bunch of musicians that all bring their best to their performance, and that night they were on fire, fully engaging the audience with a strong hybrid of R'n'B, Soul, Punk, and Garage with great harmonies, all blended together and laid out for us to enjoy, a really fulsome sound that worked great in a live space. Their set featured a lot of songs from their latest "Ferocious Love", including excellent takes on "Animal Impact" and "War with Myself", my two favorite tracks from the album, each of them showcasing the immense skills and talents of the band. They have an excellent chemistry between them, a clear sense of shared joy not only in terms of the music they're making but in being able to make that music together, and that joy comes across really well when they play.

It was a great set, and in many ways it was a great example of so many of the best things that I love about live music and going to shows. A small space with a band playing great music, a connection with the audience that speaks to a shared love of music, the opportunity to support friends and encourage them in their pursuits, and some really kick ass tunes that I enjoy hearing. And if any show was going to be my last show for a year then seeing Bad Breed at the Linsmore Tavern was the right way to go, because it captured so much of why I love seeing bands live. In hindsight it was a show that resonated with me on a lot of levels and I'm grateful to Bad Breed for leaving me with that kind of resonance, it's been a good memory to hold onto during these long months without live music.

I'll be sure to thank Mike and the band for that when I have the chance to see them play live again someday soon...