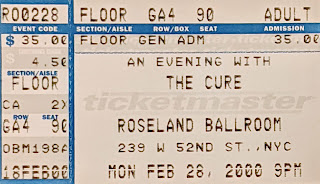 In 2000 The Cure released "Bloodflowers", a return to the darker sounds of their earlier albums, drawing heavily from the same places as their masterpiece "Disintegration". Admittedly, "Bloodflowers" isn't their most popular work, it's a bit dense and it's a bit heavy, and after the Pop they had been making for the few years prior, it was a bit of a surprise for the casual fan that knew them only for the popular hits. But when you give it a try "Bloodflowers" is really quite an impressive release, an intimate and reflective collection of songs that reward the listener with repeated listens. I really enjoyed "Bloodflowers" from the first time I heard it, and I liked how all of the songs were long and intricate and fully immersive, a really cohesive and succinct collection in my mind. It's one of my favorites from the band, and I find that along with "Pornography" and "Disintegration" it's an album that I regularly go back to when I'm feeling in the mood for some Cure.

Shortly after the album came out, the band announced a short club tour to showcase the new songs. I seem to remember it being billed at the time as their only planned gigs to promote the album, so there was a certain urgency to see them on this jaunt because, A) when I like an album I always want to see the songs performed live, and B) the possibility of seeing The Cure in a club was really appealing to me. In terms of concerts various shapes and sizes of venues all have their pros and cons, but there's no denying that a smaller venue where you're closer to the band and closer to the performance can make for a really special experience. There's a greater connection, there's a greater intimacy, there's a greater feeling of being part of a moment. By that point in their career The Cure had been playing large arenas and stadiums for over a decade, and while I'd seen them a few times already I hadn't seen them in a small space. The upcoming tour seemed like the best opportunity to see them in a tiny venue that I would get, and I waited eagerly for information about when tickets would go on sale.

But on the day that they announced the dates I was disappointed to find that there wasn't a Toronto show scheduled. The nearest that they would be playing was New York City, and that's a lot more than the quick subway ride or short walk from my home that I was used to going to see shows. But my interest in seeing them was still pretty great. And listening back to the album while talking on the phone with my friend Xtina about the situation (it was 2000, people still used their phones to talk to other people at the time...), we both mutually came to the same conclusion that this was an opportunity that neither of us could pass up. We had to figure out a way to make it happen and we had to go to New York to see The Cure.

This would be a good point to tell you about my friend Xtina. She's smart and fun and enthusiastic, she's curious and interesting and amazing, she's brave and strong and charitable and kind. She has the best hair of anybody I know, and of all of my friends she is definitely the most readily willing to drop everything and go on an adventure to another city to see a concert. Xtina's spontaneity, her enthusiasm, her kindness, her fun lovin' joie de vivre, and of course her spectacular hair, all of those things have impressed me greatly over the years, and to this day she remains one of the most amazing and special people I know. She also remains inextricably tied to The Cure in my mind, so that's kind of cool too...

So with all that understood, of course Xtina would agree with me that we should go see The Cure in New York. There was a lot to figure out, we needed to get tickets which would be a challenge because a small venue meant a small number of tickets, we needed to get there which as noted was going to be a lot more difficult than a subway ride or a quick drive, we needed a place to stay, and a ton of other things to figure out, but we were going to make it happen. And in a lucky coincidence of circumstance, it all came together perfectly and on the day of the show we arrived in New York just in time to see The Cure at Roseland Ballroom.

I'll admit that I'm not very familiar with New York. I've been there a couple of times in the past and I've enjoyed the time that I've spent there, but it's not a city that I can speak to geographically very well. Similarly, that lack of familiarity means that I don't really have much to say about the venue either, except to say that the Roseland Ballroom was a decent sized space that I would imagine could hold a couple of thousand people, probably about the size of The Danforth Music Hall here in Toronto or maybe a little bigger. I remember that it had very high ceilings and that gave the sound a bigger space to fill up, and I've since heard that both David Bowie and Lady Gaga played there at some point, but I don't really have much else to say about it other than the fact that it was a very nice place to see The Cure.

But where I don't have much to say about the venue, I have more to say about the show itself, 'cause it was pretty special. They opened with "Out of This World" which is also the first song on "Bloodflowers", resplendent in a dreamy and languid way, and then they launched into "Watching Me Fall", which I've always seen as the emotional heart of the album, a monumental track that built up a wall of sound over the course of it's live length..

At first I was thinking that they might take the opportunity to play the album straight through from start to finish, I mean, it was meant to be a showcase show, right? But that idea was quickly dispelled when they began the slow notes that announce "Want" from "Wild Mood Swings", leading into that grind-y guitar line that plays throughout while Smith recites a litany of every increasing and unattainable desires. "Want" is one of the best moments from the band's nineties output and it doesn't get that much attention, but it's a solid track, an excellent piece of music that I've always enjoyed.

Those three songs set the tone for the rest of the show, a trip through the darker and more melancholy side of the band's history that was very much in keeping with the sound of the album they were promoting. They avoided the pop hits for the most part though there were a couple of nods to singles. It was mostly a night of deeper cuts and fan favorites, and the audience were totally into it, myself and Xtina included. After having seen the band in larger venues like the Grandstand or the Skydome or whatever else, having the opportunity to see them so much closer, to be so fully immersed in the show was pretty spectacular, especially a show for an album that I was so fond of.

They played a swoon-worthy version of "From the Edge of the Deep Green Sea" where all of the audience put our hands in the sky, and a haunting version of "Prayers for Rain" that brought back memories of the Prayer Tour in 1989. They ended the set with the title track from "Bloodflowers" and I remember thinking while we were waiting for the encores that they might be more inclined to dive into the singles then, but there were no cats or imaginary boys to be found, and the band stayed true to the mood that had been set earlier in the night, sticking to a handful of darker but beloved tracks including a sprawling version of "A Forest".

The night ended with "Disintegration", a spiritual cousin to the songs on "Bloodflowers" and pretty much my favorite Cure song. As they sang about crocodiles and glass roofs and how the end always is, I felt happy to be at the show with my friend, happy we were part of that moment with the band and the rest of the audience. It was an exceptionally good time to be a Cure fan in New York.

After the show ended we left the venue and headed back to our hotel room, big smiles on both of our faces and awash in that post-show glow that happens when everything clicks just right at a concert. There's always been a bit of a disconnect between the moody and unhappy nature of The Cure's music and the happiness that it inspires in their legion of fans, but I suppose it has something to do with the idea of misery loving company, something to do with knowing that there are other people out there that feel the same way you do, a sense of numbers and community that makes us all feel less alone. Or maybe we all just like songs about cats and staring out windows, rainy days and getting lost. The world could always use more songs about cats...

I'll admit that seeing The Cure at Roseland may not have been the best gig I've ever seen them play. In fact Xtina and I would both go on to see many other shows by the band after that, some of them better, some of them worse, but I'll always remember the time that we saw them in New York as a particular highlight amid all of the concerts I've seen, a great show at a great venue with a great friend. That's the definition of a great show right there.