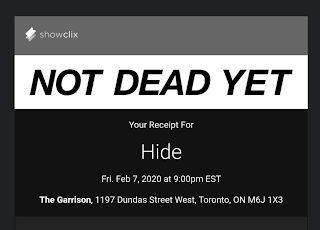 I've written a few times about the idea of concerts as shared experiences, both the feedback loop between the artist and the audience, and the idea of the audience as a group of individuals who are all taken to a new space created by the music. And there's also the idea of a concert as a night out between friends, time spent enjoying music that you can appreciate together. By now you've probably figured out that I really enjoy live music, so it should come as no surprise that a lot of my fondest memories with friends come from shows that we went to, nights where we stood in stadiums or dingy clubs together listening to loud music and being swept away by the moment. Seeing Hide at The Garrison on February 7th 2020 was a night out with friends, and given how 2020 turned out it's taken on an even greater significance to me.

I've known my friend Ryan since we were just kids going to Goth clubs back in the nineties. Over the years we've gone to countless shows together, we've seen tons of bands, we've listened to a lot of music together. It's a friendship that's rich with experience in my mind, and those are always the best kinds of friendships, right? It helps that our musical tastes intersect in a number of areas, and one of those areas is Hide. Admittedly, I just wrote about them a couple of days ago for another entry so I'm not sure I need to go into too much detail about their sound again, but I'll reiterate that I have a tremendous respect for Hide's work, I greatly appreciate their talent and vision and ideal, and I know that Ryan feels similarly. We both agree that their most recent release from 2019 "Hell is Here" is an excellent album, and we were both excited to have the opportunity to see them live when they toured through Toronto.

An additional part of the appeal for this show was that Ryan hadn't seen Hide before, and I've always felt that the initial time that you see a band perform has the potential to be a revelation, an opportunity to discover a new context for the music that you're already familiar with on album, or the chance to see an artist spontaneously bring a set of songs to life in the moment. I really enjoy that kind of thing, and I really enjoy the chance to share that discovery with other people, the chance to see an artist for the first time through a friend's eyes. Having already seen Hide play a few times before myself I knew that Ryan was going to enjoy it, that their live show would build on the strengths of their recorded work and add an intensity and energy and power to the music that would further cement his appreciation for them. In some ways I was looking forward to seeing him experience that almost as much as seeing the band.

So Ryan and our friend Ainsley and I all went to see Hide at the Garrison in February 2020 with high hopes and high expectations. It was a cold night, but not so cold that would turn anybody away from making it out, and we met at a bar down the street from the Garrison about an hour before the show. We spent some time catching up in that way that you do when you haven't seen your friends in a few weeks, and then we headed to the Garrison so we could get a place to stand either up front by the stage or over on the side by the merch table where there's a slightly elevated row of seats. Ainsley isn't as tall as Ryan and I are, so it's important when we go to shows with her that we're close enough to the stage so she can see.

Dregqueen opened the show and I really like them. I had seen them a few months before when they opened for Grun Wasser and they have a good sound to them, a nice mix of synths and charisma that works really effectively, plus they do a Nine Inch Nails cover in their set so that's pretty cool too. This time out they seemed really confident and self-assured in their performance, a strong growth in a short time that has me thinking they've got a really bright future going forward. Definitely a band to keep an eye out for.

I had never heard of Cloud Rat before that night, but I liked their set, high energy grindcore Punk with manic drums and chainsaw guitars. Their set was a loud and abrasive noise that resonated physically and emotionally with me, the kind of loud Punk Rock that speaks to the audience on a primal level. It's not something you can bottle up or experience in isolation, it's a feeling that you have to experience in the moment with other people and I'm glad I had the chance to do so.

Hide were up last, and as expected their performance was ferocious, intense, and amazing. They were on fire that night, pouring their hearts into the show, drawing the audience into the music and crafting a feedback loop of energy that burned bright with white hot light. It was really quite awesome, and as I look back on the handful of shows that I saw in 2020 it was probably one of the best that I went to.

The set was cut short by some technical difficulties, but what we did see was still enough, leaving us hungry for more with the promise of a return to Toronto where that loop of energy could begin again. In some ways that possibility may have been better than any continuation or encore, it was a feeling that there would be another opportunity to do it all again on another night, and that felt valuable to me. It still does, and I know that we'll have the opportunity to do it again on another night sometime soon. I'm sure of that.

After the show the three of us walked out to Ryan's car and I asked him what he thought of the night. I wasn't about to wax poetically about Theatre of Confrontation or loops of energy, I usually keep that kind of thing to myself in the moment until I can figure out a way to put my thoughts into words (which often find their way into this stumbly and inarticulate blog...), but I wanted to know if he felt the same way that I did. "It was pretty great," he said, but there was a light in his eyes and a smile on his face that spoke to more than it just being pretty great. I'm pretty sure that he connected with the show just like I did, and he was looking forward to the next show just as much as I was. And knowing that we're both looking forward to that next show is another bond that strengthens our friendship even further.

That was the last show that Ryan and I went to together in 2020, and with everything that's been going on in the world I haven't seen him in person since then, but we still keep in touch and we talk about music and concerts and look forward to seeing them again, the chance to recreate that energy, the chance to be part of that connection with an artist. It'll happen, I know it will, and in the meantime we have a lot of good shows to reminisce about while we wait for the next...