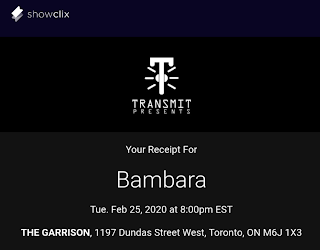 I've always loved a good story. Ever since I was a kid I've enjoyed hearing about other people's lives, other places, experiences, adventures, romance, danger, excitement, tragedy. I love the artistry involved in setting a scene and presenting a situation, the way that a skilled story teller can make us care so much about characters that they feel like family or friends. I love when a story is so rich, so detailed, so fulsome that I can't help but get lost in it's appeal, to the point where the rest of the world seems to disappear and I'm fully immersed in the story being told.
Bambara are great storytellers. Like, really exceptional storytellers. Over the course of their ten plus years recording they've crafted some truly amazing stories in their songs, tales with vividly described characters in richly detailed scenarios that completely draw in the listener. Each song has a strong narrative quality bringing to mind great artists like Nick Cave or Tom Waits, and that's pretty high praise, isn't it? I'll admit, making comparisons like that might seem pretty bold but I'm gonna stand by it. Cave and Waits and Bambara all travel the same roads, a shared highway that chronicles the stories of the lost and the broken and the tragic.

Bambara put out their latest album "Stray" in 2020, and a support tour shortly after release brought them to the Garrison on February 25th for an excellent show that was one of the last I saw before lockdown began. They're a tight musical unit, a solid band of musicians playing dark songs that are evocative and cinematic interspersed with moments of delicate and tragic beauty. It all comes together really well and I was pretty much spellbound for the entirety of their set and all of the stories they shared.

Songs like "Jose Tries to Leave", with it's detailed description of a late night exit, and the frantic stomp of "Heat Lightning" all painted vivid pictures of desperate characters trying to escape bad situations, Southern Gothic Film Noir with a Post-Punk soundtrack. Singer Reid Bateh was dynamic and dramatic in his performance, stalking the stage, acting out the tension and desperation felt by the song's characters while the rest of the band set each scene musically, moving everything along with an ease and skill that spoke to an impressive talent. It was all pretty awesome.

They closed out the night with "Serafina", an encore that left the audience on a high note with the reminder that even amid all of the darkness and tragedy around us there is also beauty and hope that can be found in unexpected places. I'm hard pressed to think of a better song ever written about a pair of arsonists who fall in love, a driven and incendiary track that stands out in my mind as one of the best love songs of the last year, burning both passionately and literally.

That's another quality of a great story teller, isn't it? Bambara know to leave the audience with a little bit of hope, a little bit of light in all of the darkness, not just because we need to believe in something but also because hope keeps us coming back to hear more stories.

I'm pretty confident that Bambara have a lot more stories to tell, and I'm looking forward to hearing all of them...