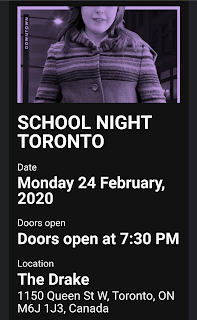 I feel really strongly that the interaction between artist and audience can lay the foundation for a good show. I've written many times about the flow of energy between the two and how that can influence the course of a live set, and I've also made reference to how a great artist can take control of that energy and lead the audience in a particular direction. From my experience that ability to lead and control interaction is an exceptional skill, and it's an ability that Ice Cream have in abundance.

I can't remember the first time that I heard or saw Ice Cream. I have a feeling that I saw them open for another earlier gig without knowing who they were, but my first conscious recognition of them came when they opened up for The Pixies at the Phoenix in December 2019. Kristin Hersh had previously been announced to play the show and I was really looking forward to see her as I've been a fan for years and it's been forever since she's played in Toronto, but a day or two before the show an announcement was made that Hersh had to cancel and Ice Cream would be opening instead.

Stuff happens and sometimes you just have to roll with it, and I decided that I would still get to the show early so I could see what Ice Cream were all about and show some support for a local band, which was definitely the right decision for me to make because Ice Cream are awesome. They're a duo, Carlyn Bezic on guitar and Amanda Crist on synth, alternating vocal duties between them. They make a really solid hybrid of Pop, Post-Punk and Electroclash with a certain amount of funk-y vibes to them, and their lyrics are intelligent and engaging with a wry humour that really appeals. It's also worth noting that Bezic is an absolutely awesome guitarist, just a really amazing player with a tight sound that reminds me of Wendy Melvoin in terms of style and playing. That's about the highest praise I can give any guitarist, because Wendy Melvoin is one of if not THE best guitarist I've ever seen.

After that show I checked out Ice Cream's Bandcamp page and was really impressed by their album "Fed Up" which had just been released a few weeks before. It's a collection of songs that was just as awesome as their set at the Phoenix, and listening to the album gave me the opportunity to appreciate their songwriting with a greater focus and reflection with repeated listens. It's a really impressive work from really great musicians and since it's release it's earned a lot of well deserved press, including being part of the Polaris Music Prize long list for 2020.

I had the opportunity to see Ice Cream again a couple of months later as part of the February installment of School Night, a monthly curated event at the Drake Hotel designed to highlight and support new talent in a great venue. They played an excellent show that night that fully lived up to and surpassed my expectations, and having a little bit more familiarity with their work at that point I had a better opportunity to pay attention to what they were doing on stage both technically and in terms of their performance.

One of the things that was really apparent and really impressed me was the way that they actively watched the audience in much the same way that we were watching them. That's not something that you see very often, and it allowed the duo to both connect and confront the audience in a way that asserted them not only as performers but as equals worthy of respect who were making music for their own enjoyment. By shifting that power dynamic, Ice Cream challenged and eliminated any ideas of objectification that may have occurred and instead led the audience in a new direction where the relationship between the two was built around a more equal acknowledgment of each other.  It was an impressive and thought provoking shift in dynamic and it really resonated with me and left me thinking about the way that we observe music, performance, and people.

I should add that in addition to successfully and effectively challenging the traditional performer/audience ideal, Ice Cream also played some excellent music. Bezic and Crist are immensely talented artists, and that talent was in full effect at the Drake, with the two of them obviously strong, confident, and fully in control of what they were doing. There were searing guitar solos, there were solid Pop hooks, really it was a truly impressive set that I thoroughly enjoyed.

On the strength of the shows I've seen and the albums I've heard, there's no doubt in my mind that Ice Cream are a really Really REALLY great band, and I'm very much looking forward to hearing what they do next. I have every faith that it'll be amazing, and I am already so there for it...