February 15th 2020, Ghostly Kisses and Grae at The Baby G 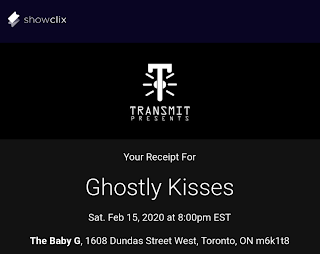 I really appreciate a well made Pop song, and I truly believe that there's an artistry in writing and performing songs that connect so easily and so effectively with an audience. Pop has the potential to be inspiring and revelatory, especially when it's done at it's highest levels of ability, and I have a tremendous respect for those who are able to reach that level of appreciation with their work. But despite the artistry and talent required to make good Pop music, there's a certain disdain towards it as a genre. Pop is often looked down upon or seen as having less value than other forms of music, even seen as being disposable, which is really quite unfortunate as the best Pop music can be transcendent, perfect, and wonderful.

A lot of people who dismiss Pop don't realize that it has a complexity to it, a structure, a form that's paired with an emotional response that immediately appeals to your feelings at a primal level that needs little consideration or thought. The appreciation for a good Pop song is almost instinctual that way, it goes right to the core of who you are, and over the years there have been hundreds of Pop songs written that have that effect, that are able to speak to something inside of us and connect with us. Rhianna makes amazing Pop, so does Beyonce. Lady Gaga has a tendency to put an artistic spin on it, but at the heart of everything she's making great Pop music. I'm sure you can think of dozens of other artists and bands that do the same, artists who make music that effects you in an immediate and relevant way, something that you can recognize and relate to because it speaks to your own life. Good Pop resonates with us like that.

So why is that? I think part of it stems from a universal subject matter, good Pop speaks to things that we're all familiar with, that we've all lived through. It talks about being happy, celebrations, being in love. It can also talk about being sad, regrets, losing love. Good Pop can talk about dreams and yearning and need, and finding a place and a community for oneself, whether that's with another person, or a family, or somewhere else where you belong. Think about "Don't you want me?" or "Crazy in Love" or "Dancing in the Street" or "Twist and Shout" or "Born This Way" or "Umbrella" or a million other examples. Each of those songs has a different format, a different style, a different sound, but all of them resonate and connect with us in very immediate and specific way. They all have an almost universal appeal and they're all examples of exceptional Pop songs.

On February 15th 2020 I was lucky enough to see two great examples of Pop music when I saw Ghostly Kisses and Grae at The Baby G. I wasn't familiar with either of them until maybe a month before the show when a random Spotify suggestion popped up for me. Curious about the name Ghostly Kisses I clicked on a link and liked what I heard, enough so that I decided to pick up a ticket when I saw they were doing a show in a few weeks time. And in hindsight, I'm glad that Spotify's algorithms worked in my favour that day because it was a really great show.

The evening began with an artist named Grae who makes really solid Indie Pop songs that are slick and sleek and really Really REALLY good. Her songs revel in the feelings of love and longing, songs that kind of bring to mind the happier side of The Cure, and she delivers them with a sincere and honest voice. That sincerity, that honesty, it's a large part of what makes her work so great, a lot of the reason why I enjoy it so much. She's writing from the heart, she's writing from her own experience, and she's baring it all for the audience to see. That takes a lot of courage and it shows a lot of strength, and I can't help admiring it. Now I'll admit, I didn't know her material well enough at the time so I can't tell you the names of any of the songs that she played at the Baby G, but I can tell you that I enjoyed her entire set and I was greatly impressed with her enthusiasm, her energy, and her talent. If there's any fairness in the world those qualities will carry her forward into great things in the future.

After a short break Margaux Sauvé took the stage as Ghostly Kisses, a name inspired by her ethereal vocal style, an achingly beautiful voice that brings to mind Tracy Thorne and maybe even Elizabeth Fraser. Paired with exquisitely delicate musical tracks built around piano and violin, Sauvé crafts haunting songs that speak to the kind of universal feelings that all good Pop songs draw from, and it really works, it really connects. She performed a set of blissful Pop magic that touched on Shoegaze, Triphop, R'n'B, and nineties PowerPop influences, all held together by that stunning voice. Along with her own material, Sauvé also played covers by the Cranberries and Beyonce, and you have to give credit to an artist who's willing to tackle such impressive talents. I'm happy to report that Ghostly Kisses did an admirable job of covering each of them, and that feat succeeded in building an even greater admiration of her artistry in my mind.

It was a night of really strong songs performed by really great talents, and I was truly impressed by both acts. I'm definitely looking forward to seeing both of them when we can go out to shows again, and if you appreciate Pop the way that I do then I encourage you to make the effort to see them for yourself. In the meantime, both Ghostly Kisses and Grae have been busy recording and releasing new material, and I recommend visiting them both on Bandcamp where you can support their work and their growth as artists while they wait to take the stage again...